Throughout the years, I’ve coached a bunch of catchers. In that time, I’ve found that many of them have a unique set of muscular imbalances, weaknesses, and structural deficiencies. These cracks in their armor dump on their performance… And worse… Put them at high risk for injury…

Especially when you throw weights into the equation.

For example, I recently coached a catcher who’s hips shifted on his way up from a squat.

As you can imagine, this not only limits the amount of weight this young gun can squat, but also puts his back at serious risk for injury.

Thing is… this isn’t an uncommon thing for catchers.

So, in an effort to keep you safe, and boost your performance, I’m going to help you out.

In this post, I’m going to share why these deficiencies exist, where they exist, how they negatively impact your performance…. And most importantly… How to fix them.

Well, that occurs because in our culture, we sit a lot. At the office, at desks, on the couch, while eating, etc. This creates tightness in the hips and a shortening of the low back, among other things.

This is pattern overload; Performing a certain movement pattern so much that it creates injury to muscle tissues.

And pattern overload is the root of the weaknesses that torment most catchers.

Where Catchers Have Weaknesses

The position catchers are in for the majority game creates a series of weaknesses in the musculature. 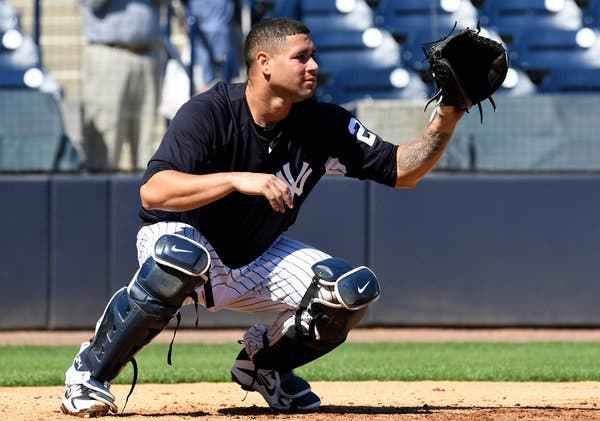 In addition, catchers have a tendency to shift their weight onto one leg, which makes one hip flexor tighter than the other. This leads to a rotated torso, which can impact core activation among other things.

Another postural flaw inherent to the catching position is a rounded back.

The rounding in the back creates tightness in the shoulders and pectoral muscles. It also creates extreme weakness in the upper back muscles, core, and promotes poor postural habits.

How These Deficiencies Impact A Catcher’s Performance

Now that we know where these deficiencies exist, it’s time to display how these weaknesses impact performance.

We’ll start with the weak glutes.

The glutes are the power center for all athletes. In baseball players, they’re a major key in your throwing velocity, speed, power hitting ability, and a bunch more.

Above, I also spoke about how catchers usually have one hip flexor that’s significantly tighter than the other. This creates shifting in the hips during strength movements, putting catchers at risk for a low back injury.

Next, we’ll move onto the upper back.

Now, a lot of baseball players possess weakness in the upper back, and this is due to their overactive accelerators (accelerators are the group of muscles responsible for the acceleration of throwing. They include the pecs, deltoids, and more). These accelerator muscles are located on the front of the body, and when they’re overactive, the pull on the muscles of the upper back (decelerators), making them weak.

When these upper back muscles become weak, there’s a big risk of injury to the shoulders, pecs, obliques, elbow, and more. To display how this works, think of a rubber band. The farther you pull it back, the harder it snaps back into place, right?

Well the shoulder joint acts the same way. But, if you have overactive pecs and deltoids, your range of motion in the shoulder, or ability to pull back, is diminished. This leads to lower throwing velocities.

A rounded back puts you in a compromised position in the weight room. Movements like deadlifts, squats, even bench press, require you to pull your shoulders down and back to avoid injury.

If your ability to do that is compromised, you’re at risk for injury.

Step One: Stretches for Catchers

The first step in addressing these deficiencies is simple.

The first stretch for catchers to fix their deficiencies is a simple couch stretch.

You should perform this everyday for one minute each side. If you have one hip flexor that’s significantly tighter, stretch that side for one minute thirty seconds.

The next stretch I recommend for catchers is the doorway stretch.

This one stretches the pec minor, a commonly tight muscle in throwing athletes. Stretching this will massively improve your posture, and may reduce any shoulder pain you’re currently feeling.

Third stretch is for the levator scapulae.

In the catching position, many catchers have a tendency to jut their head forward. This creates tightness in the levator. Stretching this will create better posture and reduce any hiking of the shoulders that may occur during throwing.

The last stretch I’ll share is a bicep stretch.

The biceps muscle extends up into your shoulder, and it’s a commonly tight muscle in all athletes. Thing is, tight biceps undermine your ability to throw efficiently, and again, they put you at risk for complicated injuries.

Second step in turning your body into a high performing machine is mobilization.

Mobilization restores range of motion to the joints, leading to more explosiveness, speed, higher throwing velocities… You get the idea. It’s pretty important.

It’s so important that I’ve already written a post containing mobilization circuits for baseball athletes. You can find it by clicking those words.

After we’ve loosened up the tight muscles and restored range of motion them, we have to teach the body to activate the muscles opposite of the tight ones.

This involves a few simple movements that should be done before every workout.

The first one is for the glutes.

To perform this movement, all you do is place one foot on the ground by your butt cheek. Then, tuck your other leg up towards your chest. After that, drive through the heel on the ground and thrust the hips up.

This will help to reactivate the glutes, and support them in firing properly during your training.

Another glute activation I’m a big fan of is the monster walk.

For this one, you’ll take a band and place it right above the knees. From there, place your knees and ankles outside of hip width, with the knee and ankle joints stacked. Sink your butt down, keep your chest up, and walk 10 yards forward, then 10 yards reverse.

This one’s great because it directly activates the glute medius, a commonly weak muscle in all athletes.

Next, we’re moving on to the upper back.

The first activation movement for the upper back is the band pull apart.

This one’s pretty common, but there are a few points you need to check off in order this move to be effective.

For one, I like athletes to perform this movement with the palms facing up. This forces the athlete into thoracic extension, a position that allows for better activation of those upper back muscles.

Next, make sure that you have a good amount of tension  on the band. This ensures that you’re providing enough stimulus to actually turn on the upper back muscles.

Finally, make sure you keep your shoulders down and back. Lots of athletes have a tendency to hike their shoulders up during these movements. This takes the emphasis off the upper back and puts it on the traps, which are already overactive on most athletes.

The second upper back activation movement I’m going to share is the lying black burn.

This movement can be performed with a dowel rod, weights, or no weights at all depending on what level of structural integrity you’re at.

What to Do Until Part Two?

I’ve just laid an extensive protocol for addressing the common weaknesses most catchers have in their structure.

If these weaknesses are left unaddressed, they could snowball into devastating injuries (think knee tears, elbow surgeries, shoulder repair, things that keep you off the field for months, sometimes years), or massive dips in performance.

In the next piece, I’m going to go over how exactly you should train as a catcher, and what movements you MUST have in your training routine.

Until then, take a look at my Baseball Power Program.

Inside, I share tips to become a 5-tool player. Tips you won’t find anywhere else on the internet.

Best part is, it costs you absolutely nothing.

Hit the link below to discover these little-known tips:

Suitcase Carry w Side Bend - A lot to discuss work

One of the easiest and most effective variations

Skater Jump with Med Ball Side Toss - Here is a la