Apply These 3 Advanced Concepts to Get Faster

There’s a BIG misunderstanding from those who try to get faster.

Lots of athletes of all levels don’t know, or just forget, that you need a mixture of weights, speed drills, AND plyometrics to really blow-by your opponents, leaving them mouth agape.

In addition to the laundry list I gave you above… There are also more advanced concepts that you need to keep in mind.

IF you really want to get faster.

There are three I’ll talk about today.

Let’s get into it:

The stretch shortening cycle is the act of a muscle going on stretch, then shortening or contracting.
An example is in a vertical jump. The stretch is the lowering movement, and the shortening occurs when you jump.

Now,
Let’s think of the stretch-shortening cycle like a rubber band. The farther back you stretch that band, the harder it’s going to snap. But, the power of the band relies on that reflex.
We want to become explosive with and without reliance on the stretch-shortening cycle.
Thing is, most athletes rely on that stretch to be strong and powerful, but you can be different, by training the eccentric portion of a movement.

You do this with tempos.
Yes, when you slow down the eccentric portion of the movement, you eliminate the body’s ability to use force acquired from the lowering portion to produce a hard contraction.
Besides tempos, you can also perform movements like box squats, that force your body to come to a complete stop.
Like I said, most athletes rely on the stretch-shortening cycle. When you train your body in absence of that mechanism, you’ll see the difference between yourself and the competition.

Have you ever seen a cheetah run?

If you have, you’ll notice it looks like it glides through the air. While it does so, it stretches its legs forward to cover as much ground as possible.

And when our spotted friend does make contact with the ground, it bounces off it, and propels itself forward with grace.

You know who else has this ability?

And you need to make the most of this speed-boosting ability too.

And multiple studies have shown that a runner’s ability to make contact with the ground, absorb the force, transition efficiently, and push off with power is inherent to successful top speed running. (Duh)

When you get good at this, it allows you to lower your stride frequency, and spend less time on the ground.

So how do you improve this?

Increase your ability to absorb and produce force, which you can do with plyometrics. For help creating a plyometrics guide, go here -> (Plyometrics Guide)

Here’s something else people overlook…

When people come out of their 40 stance, and start running upright,

When they kick their legs too far back in the acceleration phase,

They’re giving the middle finger to physics, and to their speed potential.

Yes, there are mechanically advantageous positions you can get in to get faster. While everyone is different, there are many generally agreed upon parameters for both acceleration and top speed.

With the information laid out here, there’s plenty of action you can take to get faster. 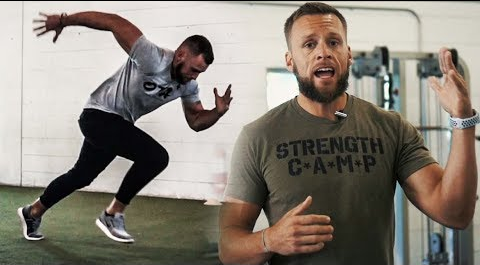 If you want a one-stop-shop for all of these advanced concepts, and more…

It’s a five step, easy-to-follow approach to make your body built for speed.

Skater to Lateral Broad. - Here’s a plyo we use

Clubbell Carries - Core exercise we use as part of

Straight Leg Bounds. - One of the simplest yet eff

Depth Box Jumps - We use these jumps as a progress